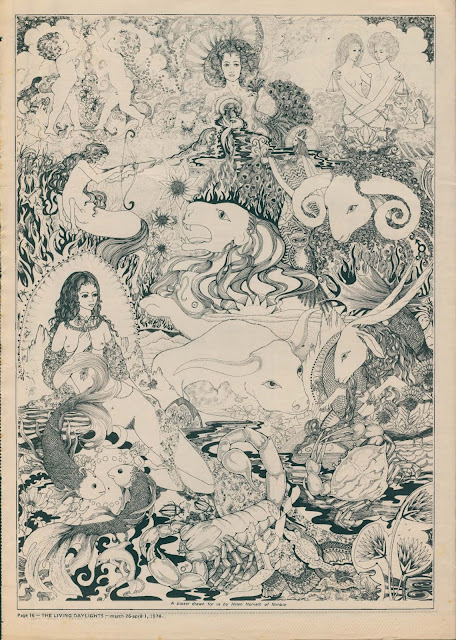 September 2014: Whilst browsing the pages of an obscure Melbourne-based magazine from 1973-4 called The Living Daylights, edited by Richard Neville of OZ fame, I found therein a collection of artworks and posters by some of Australia's best known alternate and comic artists of the period. These included Martin Sharp, Michael Leunig, Neil McLean, Garry Patterson, Dickie, Michael Fitzjames and Ian McClausland. The Living Daylights was one amongst a number of magazines from that era which arose out of the burgeoning counterculture movement. It ran for only 15 issues, during a period of much change in Australia, especially in regards to the cultural revolution which had taken place in the United Kingdom and America during the latter half of the 1960s, but which arrived in Australia shortly thereafter and ran through to the mid' 1970s. Towards the end of the magazine's life three large, poster-size, highly detailed drawings in black and white were reproduced. They were the work of an unknown artist by the name of Helen Horvath. According to a note attached to two of the drawings, Helen was "now a permanent resident of Nimbin", a hippie community located on the far north coast of New South Wales. Apart from this small snippet of information, no additional information was provided on the artist. I was intrigued, and since that time I have been seeking to discover 1. Who was Helen Horvath, and 2. What was the background to, and extent of, her artistic output? The following blog will hopefully answer these questions.

The search for Helen Horvath began with the three works reproduced in The Living Daylights between February - April 1974. They were exquisite drawings, fully of mystery, wonder and an other-worldliness to which the word phantasmagorical can be applied. Esoteric, astrological and naturalistic elements featured in works which obviously came from the hand of a skilled artist. 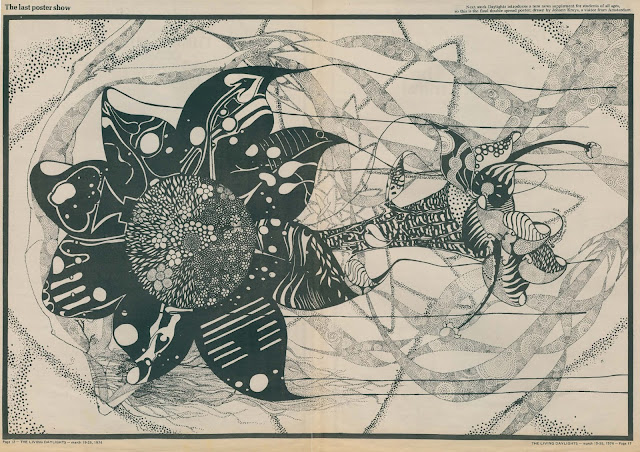 
Helen Horvath's drawings in pen are very much of their time i.e. the period know as the Sixties which extended from the mid 1960s through to early 1970s. Yet they are also timeless in their artistry. To this author they reflect the ideals of the Hippie movement and are in part psychedelic, trippy, new age and Aquarian, similar to many of the illustrations found in underground and counterculture magazines from England, Europe and the United States such as OZ, International Times, the San Francisco Oracle and the Berkeley Barb. Horvath's illustrations reflect the dreams and aspirations of those who rejected the conservative norms then prevalent in mainstream society and headed off to communes such as Nimbin in northern New South Wales, searching for an alternate, Utopian lifestyle. The hippies of the period wanted to experience a return to nature - to the idyllic Garden of Eden - and looked toward Eastern philosophies such as Buddhism for guidance. Their minds were open to new experiences and different ways of seeing things, both on the earthly plane and beyond, with the latter often achieved through the use of hallucinogenic drugs or a natural spiritual awakening. Communes like Nimbin sought a low environmental impact and engagement in sustainable practises during everyday life. Such movements were deeply philosophical and idealistic, whilst at the same time practically grounded in the need to care for individuals and survive the elements. To some observers the hippies were "way out", but to those involved in the movement, the move to communes such as Nimbin was an escape from the turmoil, confusion, violence and uncertainty of a world in the grip of a Cold War and threat of nuclear annihilation. Peace and love were more than just words, and those who had experienced the hallucinogenic drugs of the day such as LSD and marijuana were often likely to follow this path. The precise circumstances of Helen Horvath's life, which gave rise to such beautiful artistic works are not known, but was likely associated with this move towards alternative lifestyles and new ways of seeing things.


The three Horvath drawings in The Living Daylights exhibit extremely fine pen work in black ink on white paper. They include a large figurative piece featuring women, children and animals; another of a black flower with sinuous roots; and a third of a loving couple. All are reproduced in this blog. 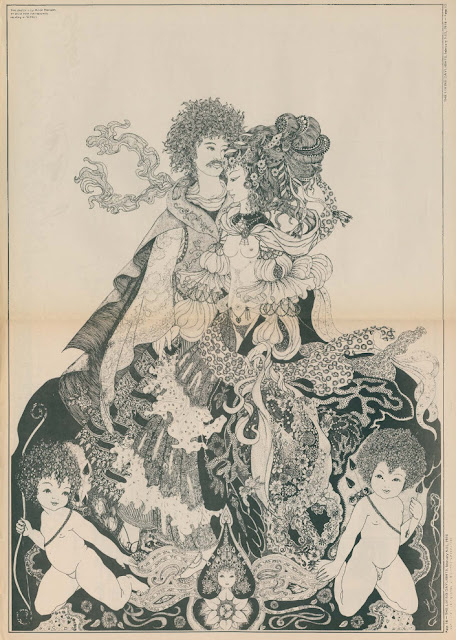 
The content of the three Horvath drawings is lyrical, sensual and romantic. It reminds this author of the work of American artist Ida Griffin, partner of the famous cartooning and rock poster artist Rick Griffin. Both Ida and Rick published works in the San Francisco Oracle magazine during 1966-7, with Ida's feminine representation of the Age of Aquarius gracing the back cover of issue number 6. 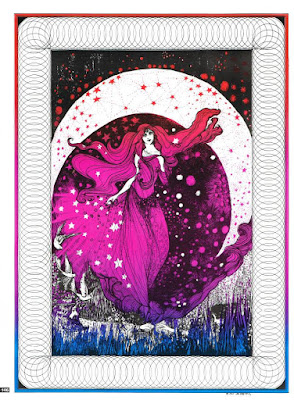 Ida's extremely fine pen work and attention to detail mirrors some of the work of Horvath. Both are similar in content and style to the work of English artist John Hurford. For example, his two page black and white drawing in the London OZ magazine number 15 of October 1968 presents a fantastical tapestry of images executed with a fine black pen and also highlighting the feminine in nature (Hill 2006). 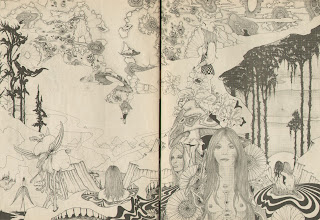 Therein we see two sensual, naked female figures, a couple in embrace, a mystical landscape with tropical flora, and strange objects in the sky, perhaps otherworldly. Horvath's own drawings from 1974 reflect similar themes, with naked women, embracing couples, other worldly encounters, and dense landscapes containing lush vegetation and fauna. Horvath's use of a mass of small dots to provide texture to her drawings is reminiscent of the work of American artist Joe Gomez as seen in his 1967 poster for a concert at San Francisco's Avalon Ballroom featuring Big Brother and the Holding Company, with Janis Joplin. 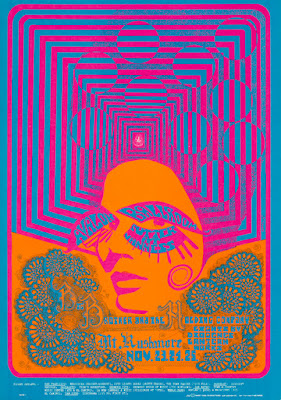 Whilst at first glance there appears no obvious connection, Gomez's poster features in the lower section a pointillist style which is used to create a mass of flower-like wheels. The top section of the poster was graphically intense and produced an optical allusion through the placement of red and blue in close proximity. It was full of colour and psychedelic, in sharp contrast with the known works by Horvath. The art of all four artists - Gomez, Horvath, Griffin and Hurford - reflected, in part, the influence of turn of the century English artist Aubrey Beardsley (1872-1898). His intricate, black and white ink drawings and prints, with their curvaceous lines and Pre-Raphaelite detail, saw renewed popularity during the mid 1960s, with major retrospective exhibitions such as that held at the Victoria & Albert Museum, London between 19 May and 19 September 1966. Beardsley's use of thick sinuous lines and curves in black ink on white paper, around figures and objects of beauty, replicated the experiences of those who had take LSD and saw the world around them transformed into a landscape of swirling images and intense colour. Others encountered such visions by natural means.

During this period of societal upheaval in the West, young artists sought inspiration for posters and magazine illustrations which reflected the new alternate "underground" cultures. Books such as J.R.R. Tolkien's The Lord of the Rings were influential is supporting otherworldly and fantasy visions. The effects of hallucinogenic drugs such as LSD and marijuana on artists was often profound, often resulting in explosions of colour and the production of drawings and graphic designs which were distinguished by a fluidity of line, similar to Beardsley's work almost eight decades earlier. Horvath's art reflects these influences in a unique way. It was the dawning of the age of Aquarius and Helen was obviously drawn to that movement for a new, better world.

The Living Daylights did not contain any biographical information on Helen Horvath apart from the brief note about residing in Nimbin, suggesting that perhaps previous to this she had been resident in Melbourne where the magazine was produced. A search of the internet by this author during 2014 found nothing of relevance. When Roger "Ellis D. Fogg" Foley - renowned for his psychedelic light shows during the late 1960s and early 1970s in support of Australian bands such as Tully - put feelers out amongst his large network of friends and colleagues for information on Horvath, he also initially came to a dead end. However, in September 2015 Foley was successful in locating Helen's son George. In an initial contact email, George stated that: "....a lot of [Helen's] art has been lost, damaged, etc. I have found a couple of things. She also did watercolours, oils, charcoal drawings, jewellery, leather work and clay. She had done some painting in Nimbin and I remember Benny and other artists visiting...." Such a revelation offered the opportunity, for the first time, to find out about the life and art of Helen Horvath and assist in celebrating her talent. And so it was that on 24 November I spoke for the first time to Helen, now known as Helene Jones.

Helene had set up a Facebook page in 2013. A Facebook posting by her son George in 2015 featured an exquisite drawing of a woman, child and lute player. 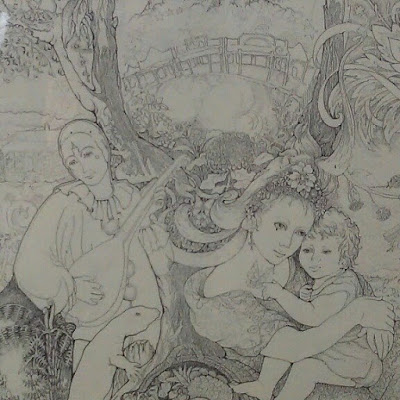 Helene noted that this was a "prayer picture" with every stoke of the pen reflecting her "love for my children ... that they will always have nourishment to the body, music for the soul, somewhere to live in peace, and nature to remind them of God's gifts and the scent of flowers."

Another posting was of an early drawing which reflected "a strange encounter and the revelation of hitherto unknown concepts to me." It featured peace doves, flowers, young winged angels, a castle and the sky full of the moon and stars. 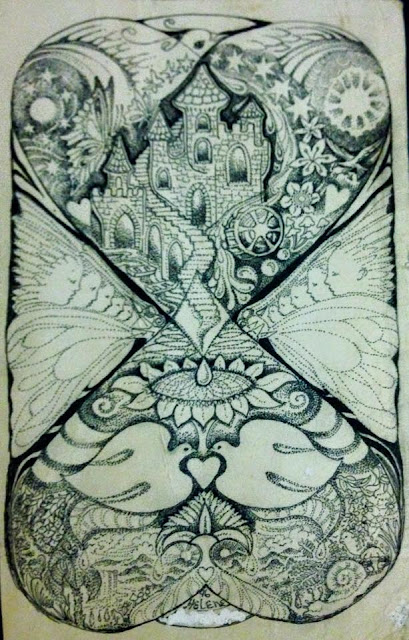 In  January 2017 a woman in Canada contacted the author through this blog and related the story of how she purchased one of Helene's beautiful drawings from an art dealership - Art Plus - in Brisbane during the late 1970s. Entitled Titania, and drawn around 1973-4, it features the head of a beautiful woman, her hair full of nature and her name written in the vines which surround the drawing. Also on sale at the time were cards featuring children and other assorted works. 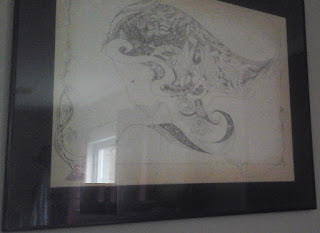